Come Back To Life is the inspiring story of a seasoned media veteran who unexpectedly found himself struck down by a massive heart attack in the prime of life, and then died minutes later in a hospital Emergency Room. It is told in an honest, straightforward manner by a formerly cynical journalist who had no expectation of anything after death but endless darkness, and who was amazed to discover how wrong he had been. It brings the phenomenon of Near Death Experience to vivid life for every reader. Jim Chapman has been interviewed on the ABC, CTV, TVO, and Discovery television networks, and on the BBC and CBC radio networks, as well as dozens of radio stations and podcasts.

Come Back To Life 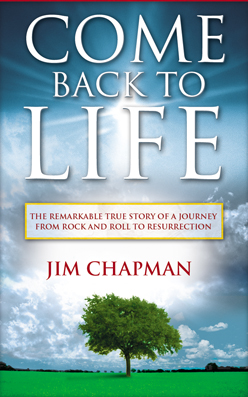 Jim’s had quite a life, starting with a dream that seemed to be coming true……..

“We were part of the first wave of Canadian bands to invade the U.S., landing a recording contract with Columbia Records in 1968, living in the same hotel as the Jimi Hendrix Experience and sharing an agent with James Brown and Dionne Warwick. We were on top of the world. Then we slipped, and the fall led to my first and worst depression.”

a depression that threatened to bring everything to an end…..

“I raced into the night and as the bridge came into view I imagined what it would be like to flick the wheel and send three thousand pounds of steel and a hundred and fifty pounds of me into the massive solid stone. Oblivion, an instant solution to all my problems.”

a second kick at the can…..

“By 1971 I was playing with rockabilly legend Ronnie Hawkins but what started out as a dream come true again ended with bitterness and disappointment after a phone call from Kris Kristofferson.”

“For the next thirty years I bounced from job to job. I was a booking agent, a recording studio owner, an advertising agency executive, a jingle writer, a used car salesman, a pro baseball marketing manager, a corporate communications consultant and, finally, a radio and TV talk show host and newspaper columnist. Not exactly a smooth career path.”

“I had just finished my workout when I collapsed and was rushed to the hospital. Several minutes later my heart stopped beating. This is not generally a good thing. You can die from it. And I did. “

with a surprising outcome………

“What I had thought, seen and felt when I stepped beyond this world had changed my outlook on life and death profoundly, and very much for the better. Some people die without ever learning how to get the most out of living. I was different, I got to do both.”

If you’re afraid of dying, if you’ve lost a loved one and grieve for them, if your faith no longer gives you comfort about life after death, you must read this book. It will change the way you look at life, and death, for the better.

The West is a culture in denial. In spite of large numbers of people professing faith in religions that promise life after death, dying remains the great, universal fear. We disguise it with language – people don’t die, they “pass on”, “pass away” or become “deceased”. We pretend it won’t happen to us, and insist that doctors work miracles to keep it at bay long after hope is gone. All because we’re afraid of what death will bring.

I was too, but not anymore.

The latest techniques in emergency cardiac medicine are now resuscitating millions of people who come back to life reporting “Near Death Experiences” involving the clinical death of the body but the continuation of conscious thought. And the overwhelming number of these ‘reborn’ individuals report experiencing feelings of peace, joy and love they describe as more profound and comforting than anything they have ever known.

I am one of them.

My Near Death Experience taught me that death is nothing to be feared. We must learn to see it for what it really is – just another step along the continuum of existence. It’s past time we all stopped being afraid. There is an awareness beyond the one we know, and that means the real tragedy is not dying – it’s not living life to the fullest because of a pointless fear of death. The only power death really has over us is the power we give it to rob us of the joy of living. Take that away and we take back ourselves, we Come Back To Life.

Here are some comments about Jim and his book:

“Jim Chapman’s story is an inspiring, transformative and deeply personal testimony to that all-embracing presence at the circumference and also at the core of the heart and mind of each and everyone of us. It’s a matter of life’s triumph over death and so its message is one of urgent, universal importance.”

Tom Harpur, best-selling author of, among others, “There is Life After Death” “Water Into Wine”, “The Pagan Christ”, “Living Waters”, and “Born Again”

“Come Back To Life is an uplifting message of benefit to everyone.”

“I am glad you survived your heart attack and are now sharing your story. It is a very important one.”

“A friend sent me your book and it saved my life. I cannot thank you enough for having the courage to write about something that many people have experienced and most (like me) are afraid to talk about. I’m not afraid any more, about living or dying.”

“The compelling way Jim described his life and his death made me feel like I was reliving the events with him.”

“I loved your book and feel so much more comfortable about growing old after reading it.”